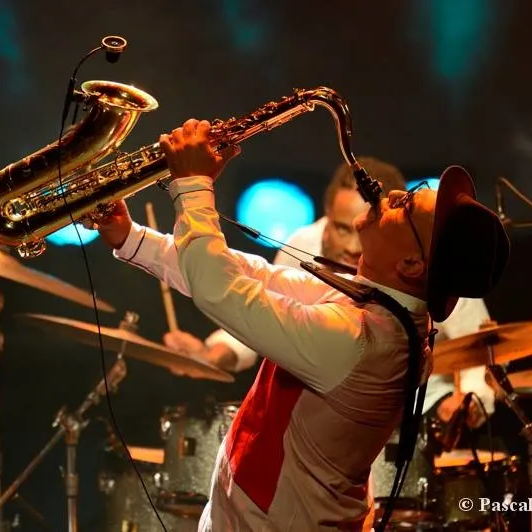 Jacques Schwarz-Bart is a recording artist with seven albums to his name, as well as a composer and educator. He has also produced over 20 records for a wide range of artists, is featured on over 150 albums as a side man, and has taught master classes and clinics in 12 different countries. His collaborations include work with Roy Hargrove, Danilo Pérez, John Scofield, D’Angelo, Erykah Badu, John Legend, and many others.

Born in 1962 in Abymes, Guadeloupe, Schwarz-Bart started playing saxophone at 24, an age when most musicians are already professionals. After three years of self-teaching, he left his position as a senator’s assistant in Paris and headed to Berklee College of Music. He then moved to New York City, where he collaborated with many of the greats on the jazz and neo-soul scenes.

In 2005, he released his first project as a leader, Sone Ka La, which revisits his native music through the prism of jazz; it won worldwide critical acclaim. His latest release, entitled Jazz Racine Haiti, made him an ambassador for a school of modern jazz rooted in voodoo music. His impressionistic writing, powerful tone, and wide-ranging language—both lyrical and angular—have fueled a growing presence on the world stage.

Schwarz-Bart was awarded the status of Knights of the Arts and Letters by the French government in 2015. He teaches at Berklee while keeping up with a steady touring schedule. He is the laureate of the Bernheim Award for the Arts for 2017 and will release two CDs in 2017. The first is a collaboration with legendary Cuban pianist Omar Sosa entitled Creole Spirits. The second is a tribute to his late father, Jewazz, a contraction of Jewish and jazz. A father and husband, he currently lives in New York City.