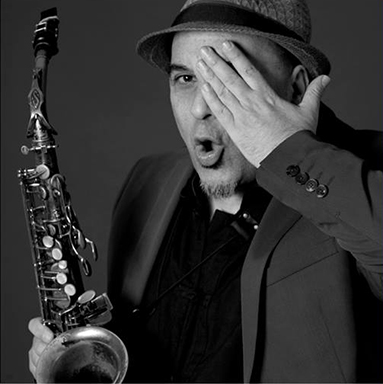 Known for his splendid tonalities and melodically outstanding charts, the Argentinian native demonstrates his superb skills on alto, tenor and soprano saxes, while employing a wide range of Panamerican references, from straight ahead to tango to candombe to samba to mambo. The source of Feldman’s ease at crossing musical genres is his eclectic musical education. Growing up in Cordoba around painters who gathered in the familly gallery art business, listening to his father’s jazz records, he attended Conservatorio Provincial de Musica and was very soon part of the prominent music scene in his hometown, becoming a founding member of acclaimed band Los Musicos del Centro. Oscar benefitted from a long association with Hermeto Pascoal, whom he met in 1979 and the next year, barely 19 years old, he was invited by the great bandoneonist and ECM artist Dino Saluzzi to join his group. He then moved to Buenos Aires, where his career took off, becoming a sought-after studio musician, recording more than 40 albums as a sideman and touring with Argentina’s most prominent artists. He won the Outstanding Performance Award as the Best Soloist in Fusion in 1986. Living and working in a big metropolis whetted Oscar’s appetite for more and he procured the Achievement Scholarship Award from Berklee College of Music. With training from the best jazz teachers, he graduated cum laude in 1995 with a Major in Professional Music. Oscar began to realize that he could be an artist bridging both worlds and soon after was part of the United Nations Orchestra conducted by Dizzy’s successor, Paquito D’ Rivera.